The Pound fell yesterday wiping out most of the gains we had seen in travel money rates for the previous week. This was a bit disappointing. The Bank of England’s own target is 2%, early predictions on  Tuesday morning said that the markets expected no more than 1.9% and the actual figure was 1.8%. All in all if things are better than you had hoped then you would expect a more positive reaction.

The problem seems to be that a single figure of 1.8% cannot convey the myriad of different markets and sectors that make up that single figure. When the Pound crashed in value in June last year it made many things more expansive, including just about everything that is imported or traded internationally. The flip side of that was that UK exports got cheaper.

At the same time Oil and related energy prices fell significantly. That masked some of the impact the Pound’s fall. Oil was more expensive to buy in Pounds but the oil itself was getting cheaper.

That energy offset masked a lot of the impact that the Pound’s fall is having. The likes of you and I are not buying oil on the international markets so we do not feel that benefit but we do buy food in supermarkets and that has gone up and up by far more than the 1.8% figure. 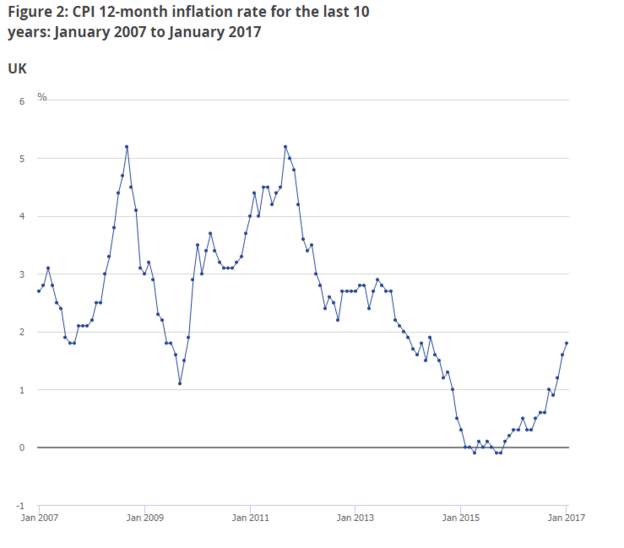 Graph coutesy of the Office for National Statisics

The average wage rise last year was just 2.7% and as always that is a mix of some people getting big increases balancing out many people getting smaller increases. For a fairly typical family prices are rising faster than wages. It is that crushing of family finances that has caused the markets to shun the Pound. You can think the of the problem as… How are you going to sell anything to anyone if every week people have less money than they had the week before?

So what does this mean for you and I?

It means that you are going to get less Euros and US Dollars when you buy travel money. Thankfully the fall was not too bad and rates on Tusday were still better than they had been the previous week. That is the positive message to hang on to. Over the past month the over all trend has been for the Pound to gain in value not fall.

Hopefully this will just be a wobble and we can look forward to better rates in the near future.

For the current Euro exchange rates you should see our Euro Comparison Page.

For the current US Dollar exchange rates you should see our US Dollar Comparison Page.